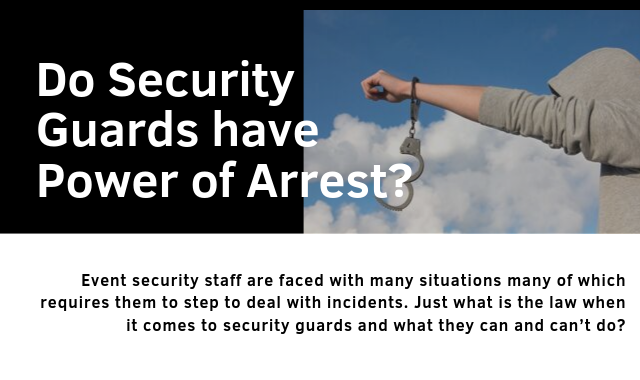 Do Security Guards have Power of Arrest?

Event security staff are faced with many situations many of which requires them to step to deal with incidents. Just what is the law when it comes to security guards and what they can and can’t do?

You’ll see reference to SIA licensed security guards and staff across the web. The importance is that anyone active in the security industry needs to hold an SIA license. If they don’t, they and their employer are breaking the law.

What is the SIA?

There are two types of SIA licence:

Physical intervention is when security personnel prevent or restrict someone’s movement such as blocking someone from entering or leaving, physically restraining someone being violent or aggressive, redirecting them by pushing, pulling or steering them and may include physically carrying someone to another area.

In other words, it is the use of physical force in order to maintain security and safety at an event or locations.

When is physical intervention appropriate?

There is often concern not just about the level of force but when it is used. SIA licensed security staff have clear guidelines on when it is appropriate to use physical intervention;

What about the power of arrest?

Everyone has the power of arrest.

It’s a bold but true statement! But the situation is complicated. You can arrest someone if;

• They are in the process of committing an indictable offence, e.g. theft
• They have reasonable suspicion that they have committed such an office and can make a citizen’s arrest if:
o There is not a police officer to make the arrest
o Or, it is necessary to arrest them to stop them from:
 Causing injury to themselves or others
 Suffering physical injury
 Cause loss or damage to property
 Leaves or attempts to leave the scene of the crime before a police officer arrives

What is an indictable offence?

This is a crime or an act for which the person would be tried in a Crown Court. This would include theft, burglary or criminal damage, for example. And because security staff are liable to come across, they are likely to make a citizen’s arrest.

But, as security staff, the person will need to consider all factors before plunging in and either performing a citizen’s arrest or using physical intervention. But with the right training and growing experience, the use of both will be used appropriately.

The role of security staff, security guard or door staff is a responsible one. Physical intervention and a citizen’s arrest are the last resort with the majority of licensed event staff avoiding them at all cost. And this is why using licensed security staff at your event or premises is essential.